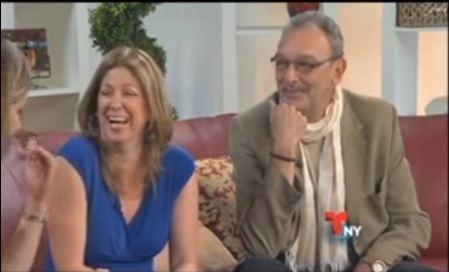 New York City has given a mighty welcome to Repertorio’s new comedy, “La nena se casa.” With a stellar cast, sold out shows, an enthusiastic reception by the media and a delicious wedding cake ceremony held here in our lobby, the 2013-2014 season is off to an exciting and popular  start.

It’s no secret that the cast has great chemistry, both on and off stage. Actress Wanda Arriaga and actor Nelson Landrieu were invited by Odalys Molina from Telemundo 47’s program Acceso Total, where they discussed their characters, their work, and their overall experience with Carlos Ferrari’s play.

You can see Wanda and Nelson in “La nena se casa” – as well as Dalia Davi, Hannia Guillén, Sandor Juan, Jerry Soto & Gredivel Vásquez – throughout the season, and be sure to stay tuned for more press coverage of this hysterical comedy. Also check out our upcoming appearance on Univision 41’s morning program, “Al Despertar,” with Arriaga and actress Dalia Davi on October 4th, as well as their fast approaching interview on NY1 Noticias with José Simián on October 7th.

CITA A CIEGAS will premiere at Repertorio Español on Thursday, October 17th, 2013 at 7pm
SCHEDULE, TICKETS AND INFORMATION: Repertorio.org or call 1-212-225-9999