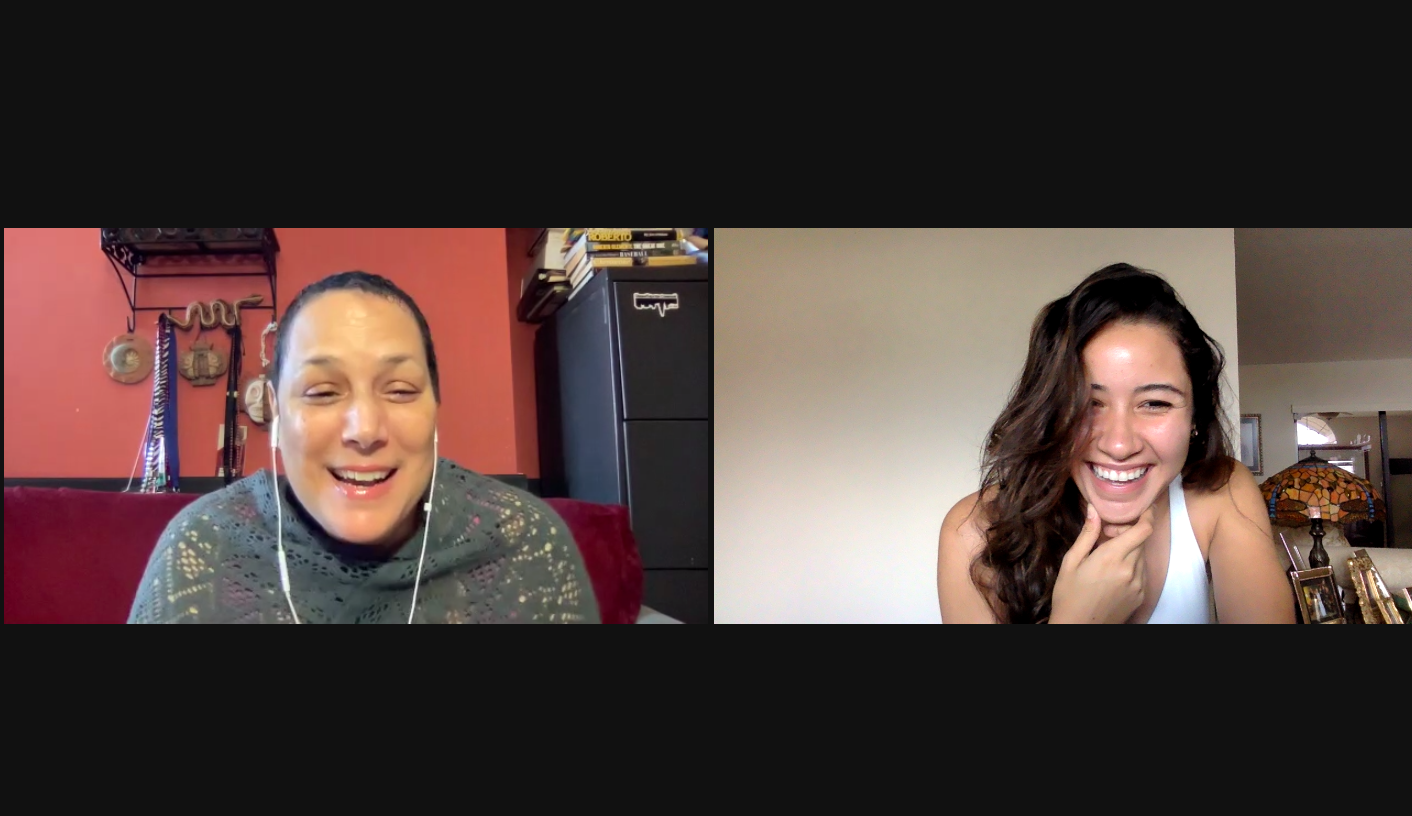 By Ana Zambrana in colaboration with BIPOC Critics Lab.

From the moment I pressed play to start La Gringa, until lights out, my mother and I had tears running down our cheeks. Mind you I am twenty-three years old and have seen my mother cry maybe two times in my entire life. But we are in a time of isolation, to where we haven’t been able to see my ninety-two-year-old grandma, who lives back on the island. So to be able to have two hours of what felt like being reunited with our family, was a gift. I have to thank Carmen Rivera, the playwright of this piece. La Gringa is celebrating its Twenty-Fifth year at the Repertorio Español. I was able to have a Zoom room with Carmen to talk, not only about her play, but the moment we are experiencing as Latinas today. Rivera is no stranger to Repertorio, not only because it is home to La Gringa, but she tells me that Repertorio is the Theatre she used to go to on high school field trips.

I remember going to Repertorio when I was 15-16, we would go for Spanish club! After every show, Federico would do Q&A’s and I remember him saying “if you ever write a play, we are here”. So when Repertorio was doing their reading series in 1994 and my play was selected, I was just shocked. It’s surreal, twenty-five years later. I’m so grateful. For this to happen with La Gringa it’s, wow. I feel so grateful for René Buch, Gilberto Zaldívar, and Robert Federico. When you write a play you hope it gets done of course, but to say it’s been performed every season at Repertorio for twenty-five years, it’s an honor.

You know there’s a reason why this needs to be in every single season. I find it as such an identifier for people my age, who are struggling with identity. Especially now that there are more people who are moving here from La Isla.

People are always telling us who we are, what we are if we’re significant or not significant enough. They are always determining and passing judgment on our culture. At the end of the day, I’m saying who I am and who I want to be. It’s in my heart and you can’t take it away from me. I remember once I had an interview in Spanish on a Dominican Republic TV show. You had to have earphones on and I heard myself. For a second I thought to myself “oh my God, I have such a thick accent in Spanish”, I then apologize for my accent, in my head. Then for whatever reason, I don’t know how this happened, I said to the interviewer “I apologize for mi acento de diaspora”. That moment was a revelation for me, I can’t be who I am not. I’m born and raised in New York, I’m a Puerto Rican in the diaspora. There’s nothing else, I can’t be who I am not.

You’re right, regardless, people are going to like our accent or they won’t? There is nothing we can do about it. Except how we deal with it.

Speaking a second language is such a powerful thing! So when people come with negativity, at worst, I’ll say “gosh I can’t deal with your negative energy right now”.

Absolutely, just moving on with my energy. I’m very much an “energy” person and yogi. I felt SO seen when in your play we get our Gringa doing Yoga con su Familia, and doing all these things that my Familia calls me crazy for. One moment especially was the argument of not being Puerto Rican enough, because I have gotten in pretty turbulent conversations with my family back home on whether or not I am indeed Boricua. I had to know whether or not those moments were derived from actual experiences?

Hahaha yeah in another lifetime. This happened when I was 21, I worked for an insurance company and they had an office in Hato Rey. So I called them and said, “ hi I was just wondering if I could stop by the office and talk to you guys about perhaps relocating”. Then they take me on a tour of the office and they bring me into the conference room. And I went “I don’t mind starting from the bottom again, I don’t mind any of that” and they go, “oh, no, you’ll never get hired. You’re not a Puerto Rican national. We’ll never hire you. Nobody will respect you because you’re not Puerto Rican”…..I remember my mother, who is just awesome, was waiting for me in the car and she goes “What? That’s some bullshit”. I was shocked. Then when we go back home, to my family in PR, I told them what happened and they said “of course not, you’re not Puerto Rican, you’re American”. Wow, you know, even my own family. Now, our discussion didn’t get to the heights of the play, but it still happened. That and then the issue of the house I created as a metaphor for the island.

Yeah, it is shocking! The people you innately feel connected to, reject you in a way. Then to feel it come from your own family, its sense of displacement. But when we are over here in the states, where do we fit? We aren’t wanted there, but then over here we have to work twice as hard to even be considered? As if we have to prove ourselves. In college, I felt this need to constantly be involved, doing double the amount of programs/positions, not even to be above, but just to be at the bar.

Yes! There is already an assumption that we cannot do the job. So now, we have to get to the point where they actually think “hmmm..maybe they can do this job”. Then from there, we have to build upon that, and it’s not fair. But that’s just that’s the world we live in. I think the BIPOC Community has always known that. Except I think Trump, Co-vid, and Black Lives Matter really brought out the inequities that we’ve always known.

Honestly, I didn’t even really come to notice these structures/barriers that were in place until maybe college. That is where this real sense of imposter syndrome set in. Especially when I was starting to be put in positions of leadership. I remember once I was assistant directing a show, and it took me about three weeks to gain the same amount of agency one of the male actors had from the beginning.

OH, yes that feeling is exhausting! It became a part of our journey, the journey of trying to find my place in the business and whether or not the powers that be want you. There are so many mind games that are being played and you know It’s like a ghost. How do I address it? I don’t have the answer other than I’m going to claim my space and you’re not going to take my agency away from me. I’m not going to let you in. I’m living my dream and if you’re not down with it, that’s fine then Godspeed. It’s the same as when I wanted to be a playwright. I wanted to be a playwright, so I became a playwright. I actually told my husband, if I die tonight, they’re going to say Carmen “The playwright” died. Then my husband, who actually is the one who told me to develop La Gringa into a full-length play, says “you know that’s pretty damn good”.

That’s absolutely pretty damn good. There are a slim amount of people that can say that they made their dream their reality. Which I have to say, when I watched your play, with my mother, that really made me emotional. Knowing that a “Gringa” wrote the longest running Spanish Language off-Broadway play. It made me proud to call myself a Gringa, which is a word that’s meaning to me definitely has been a mix of good and bad.

I believe it’s the intention behind the word, that is what makes it good or not good. If we joke about it, I don’t care. I think it’s completely fine. But if somebody says it in a mean way, that I don’t like. I have no problem joking about it because we’re living in a diaspora here. We’re different you know. So what we are getting is an evolutionary word that encompasses how our culture adapted, you know, so I don’t feel negative about it.

It’s definitely about the intention, as you’ve shown in your play there’s nothing to be ashamed of. We need to celebrate our diasporic identity, there is a reclaiming of the word. Now, I call myself a Gringa when I mess up a word or when I add my superfood creamer to my Café Lareño. Honestly, all my foods end up being a little Gringa, I’ll add Hemp seeds to my Mofongo.

You know what for me it wasn’t with coffee, but instead, I would bring my packets of Green and Tumeric tea to Puerto Rico! I will say though, when I was a little I started going to Puerto Rico. My grandmother would make me Café Con Leche and it was the best. Now, If I drink coffee it’ll only be in Puerto Rico and it’ll be the way that it’s made there. Oh My God, with my soda crackers and butter… 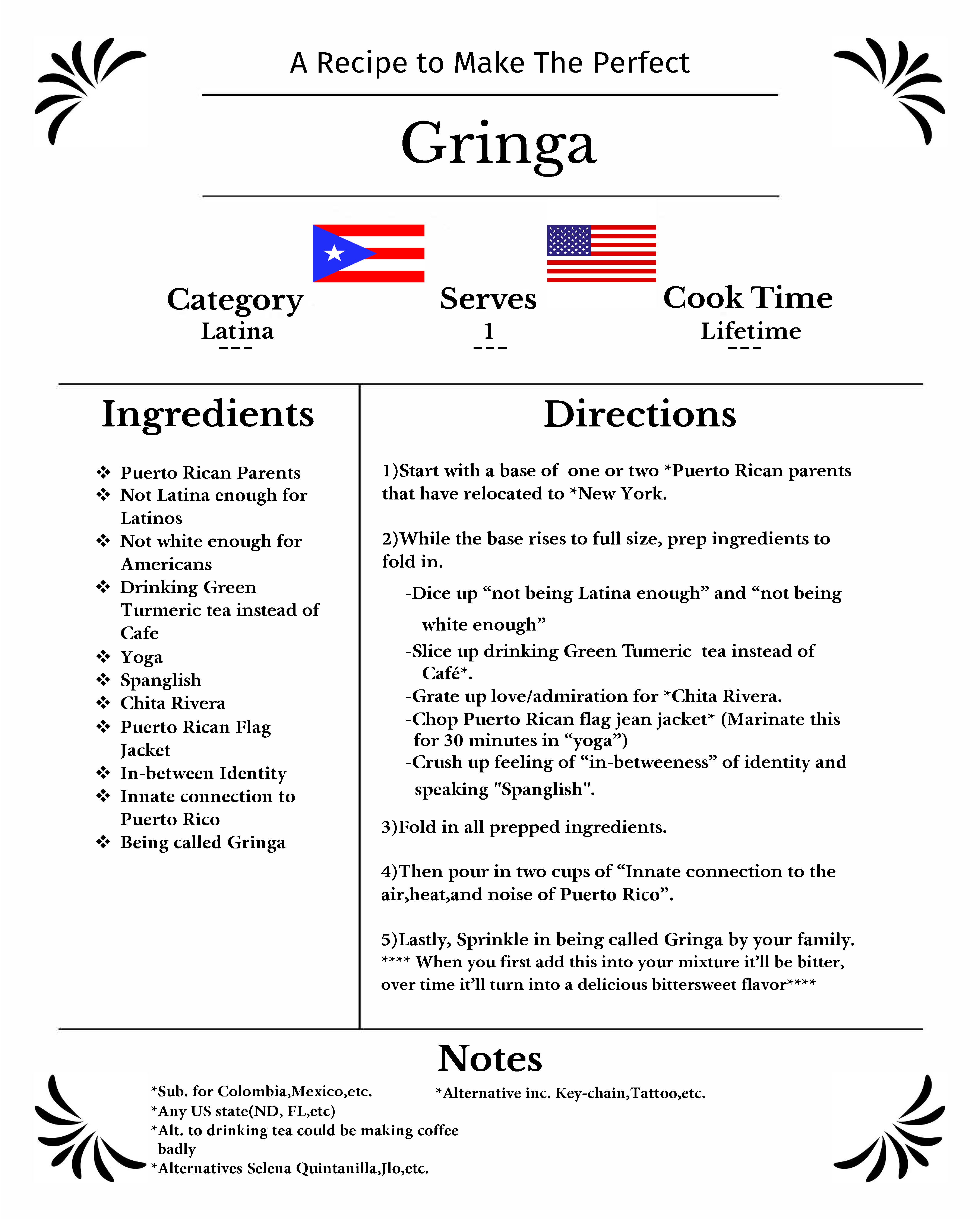 Oh my god yes…then you dip the galleta in the coffee, uhh so good! It always tastes better when you are in Puerto Rico too. Anytime I see something or someone from Puerto Rico I automatically feel connected. It’s like a light switch. I remember when I found out Gina Rodriguez was Puerto Rican I immediately became obsessed, she actually became a really big inspiration to me. Her performance in Jane The Virgin was the first time I saw myself on screen.

I felt the same way with Chita Rivera, well partially because of my name and I also used to have curly hair. But she was Puerto Rican and I thought she was amazing. She has this strength and this warrior spirit. She was and still is a badass. I also connected with, and this isn’t going to make any sense at first, Camus’ book The Stranger and said “that is me”. I still can’t explain it to this day. I can’t tell you why, other than I know what it’s like to be out of place. I know what it’s like to not fit in anywhere. I’m still a person that doesn’t fit in anywhere. Just like the line I wrote in La Gringa “I’m nobody from everywhere”.

I think that’s such a perfect example of the mezcla it means to be Gringa. Where you bring together two things that seem so different, but they come together to make you. That’s beautiful, thank you for giving us Gringas something that is ours. Is there something you like to say specifically about the 25th anniversary?

I just really want to thank René Buch’s directing. He was the one that made the version we see. No house, just the wooden panels, because he said: “the story is a metaphor”. That completely elevated the script, it made it universal. René’s direction informed my aesthetic as a playwright for the rest of my life. We are here speaking because of what René did to the play. We are here because Repertorio said yes and Robert Federico continues to say yes. 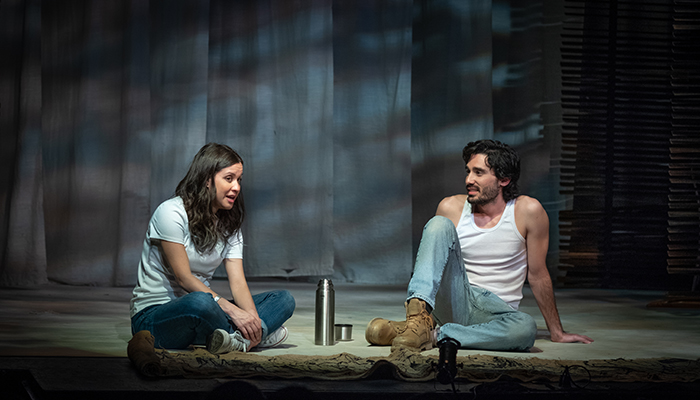 For tickets and information visit: repertorio.nyc